ABSTRACT: The American College of Pediatricians (ACPeds) calls attention to the extensive scientific literature documenting marijuana use among youth as a risk factor for the development of long- term mental illness, particularly depression, suicidality and schizophrenia. This data behooves government leaders to refrain from further legalization of marijuana use and to instead enact only policies that will reduce cannabis use among youth.

Growing numbers of adolescents believe cannabis is harmless. According to the Monitoring the Future 2019 study by the National Institute on Drug Abuse, 35.7% of senior high school students surveyed admitted using marijuana in the previous year and over 6% of them were daily users. In addition, some teens vape marijuana as one of the liquid ingredients in electronic cigarettes. Among the 12th graders surveyed, 14% had vaped marijuana in the previous month and 3.5% did so daily.1

This is to be expected given that recreational marijuana use by adults is increasingly being legalized across the United States.2 In a previous position statement, the ACPeds documents a rise in marijuana use among youth following its legalization for adults, and marijuana’s grave harms to minors.3 This scientific review supplements that statement as it describes a now proven link between marijuana and mental illness. It summarizes many of the studies implicating marijuana as a causal factor for the development of depression, suicidality and schizophrenia in adults and children. This elevated risk for mental illness is a grave concern to pediatricians since adolescents appear to be the most vulnerable due to the rapid brain development that occurs during this stage of life.

One of the first reports linking marijuana use to mental illness was from India in December, 1873. The British government’s review of asylums in India noted that “habitual use [of hemp] does tend to produce insanity”. However, the Indian Hemp Drugs commission obtained testimony from 1193 witnesses, and ultimately issued a 361 page report with inconclusive findings.4,5 Additional investigation revealed that the commission failed to differentiate between a less potent form of the drug called “bhang” and a more potent form called “ganja”. Users of the more potent form were found to be more likely to suffer psychosis after being released from the drug rehabilitation program. Asylum statistics showed 20 – 30% of inpatients had a history of cannabis-related psychosis.4

There was little mention in the medical literature regarding the relationship between marijuana use and psychosis until the 1970s. In 1972 an article appeared in the International Journal of the Addictions entitled “Forty-six cases of psychosis in cannabis users.”6 Other case reports were published, but their methodological design suffered from important confounding factors. These included:

However, there is now enough research controlling for the above variables that it is possible to demonstrate the significant impact of marijuana use on adverse mental health, especially psychosis.

During the 1980s, Dr. Sven Andreasson, a Swedish addiction specialist, noticed that the schizophrenic patients who relapsed after being treated and released from the Karolinska Institute in Stockholm were often the ones who used cannabis. In an effort to determine the directionality of this association with marijuana, he conducted a retrospective study based upon data collected by the Swedish military draft. Questionnaires completed at intake by draftees were collected without personal identifiers. Of the  nearly  50,000 recruits aged 18 – 19 years between 1968 and 1983, 92% had included information on their drug use. Since Sweden also had data on all hospitalizations for schizophrenia, Andreasson worked with statisticians to evaluate the outcome of 45,570 conscripts who were followed for 15 years. By 1983, 246 (0.54%) had been diagnosed with schizophrenia. Significantly, of 4290 who had only used marijuana once, there were 49 cases of schizophrenia (1.16% - twice the risk of nonusers). Of the 752 who had smoked more than 50 times by age eighteen, 21 had received the diagnosis – a risk of 2.8% or six times the risk of those who had never used marijuana.7

In an evaluation of a smaller subset of the Swedish conscript study, looking only at those men residing in Stockholm County, Andreasson and colleagues found that those who reported using cannabis on more than 10 occasions were four times more likely to develop schizophrenia than nonusers.8

A number of subsequent studies have shown a similar association between marijuana use and mental illness. People who are dependent on marijuana frequently have other comorbid mental disorders including but not limited to anxiety, depression, suicidal ideation, and personality disturbances, including amotivation and failure to engage in activities that are typically rewarding (see figure 3).9 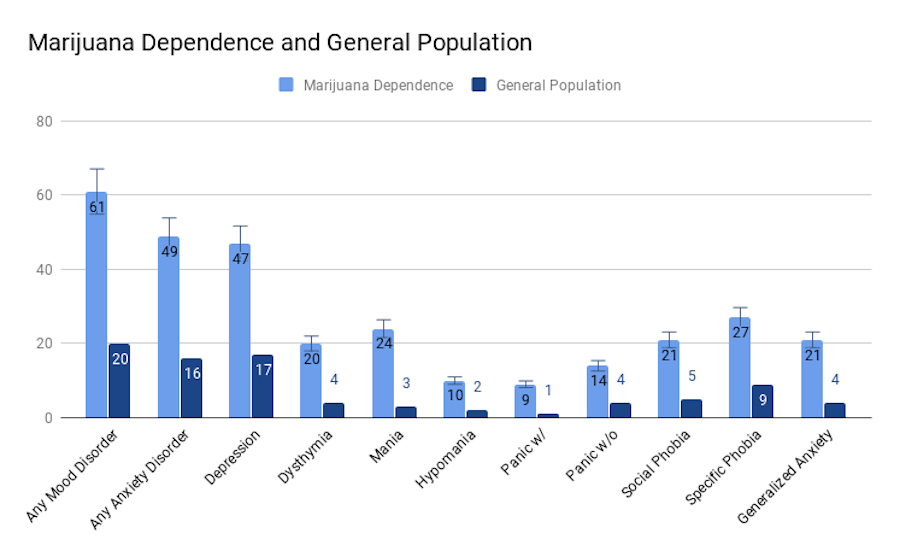 Above chart reproduced from www.drugabuse.gov

Population studies also reveal an association between cannabis use and increased risk of schizophrenia. In the short term, high doses of marijuana can produce a temporary psychotic reaction involving hallucinations and paranoia. There is also sufficient data indicating that chronic marijuana use may trigger the onset or relapse of schizophrenia in people predisposed to it, perhaps also intensifying their symptoms.12,13

A series of large prospective studies show a link between marijuana use and the later development of psychosis with genetic variables, the amount of drug used, and a younger the age at which use began all increasing the risk of occurrence.

A 2015 review of 10 studies evaluating the possible link between cannabis use and the development of psychotic disorders found nearly a 50% increased risk of psychosis among cannabis users versus nonusers. “There is a strong body of epidemiologic evidence to support the view that regular or heavy cannabis use increases the risk of developing psychotic disorders that persist beyond the direct effects of exogenous cannabinoids.”14

A 2018 prospective longitudinal study evaluated the 6534 children in The Northern Finland Birth Cohort of 1986, with questionnaires collected at 15 – 16 years of age and followed until age 30 years. They found, “The risk of psychosis was elevated in individuals who had tried cannabis five times or more…The association remained statistically significant even when adjusted for prodromal symptoms, other substance use and parental psychosis.”15

A 2018 prospective study using the Avon Longitudinal Study of Parents and Children followed 3370 children and assessed cannabis use at age 17 years. “Cannabis use at least 2 – 3 times weekly was associated with later hypomania (OR=2.21) after adjustment.”16

A 2020 systematic review and meta-analysis of 15 studies found just one dose of THC could induce psychosis and other psychiatric symptoms in adults who had no history of previous mental illness.17

A 2019 meta-analysis of 11 studies involving 23,317 individuals took into account premorbid mental health concerns. Evaluation found “adolescent cannabis consumption was associated with an increased risk of developing depression and suicidal behavior later in life, even in the absence of a premorbid condition.” The odds ratio of developing depression for cannabis users was 1.37 when compared with nonusers. The odds ratio for suicidal ideation was 1.50 and for suicidal attempt was 3.45.18

A 2019 multi-site study between 2010 and 2015 evaluated the influence of low-potency (less than or equal to 10%) versus high-potency (>10%) THC availability on the incidence of psychosis in Europe. Using a case-control method, researchers found that not only was  daily cannabis use associated with an increased risk of psychosis, but that risk increased nearly five fold for those who daily used high-potency cannabis. The authors calculated that 12.2% of first time cases of psychosis could be prevented if high-potency cannabis was not available. These findings led them to conclude that “the strongest independent predictors of whether any given individual would have a psychotic disorder or not were daily use of cannabis and use of high-potency cannabis.19

Finally, a 2020 systematic review of all literature through February 2019 concluded that “[c]onsistent evidence, both from observational and experimental studies, has confirmed the important role of cannabis use in the initiation and persistence of psychotic disorders.”21 The risk was increased in those with more frequent cannabis use, with earlier age at onset of use, and with higher potency cannabis and synthetic cannabinoids. These authors noted that 10 of 13 prospective longitudinal studies showed cannabis users had a significantly increased risk of psychosis compared with nonusers. Two of the other three studies showed a similar trend. They also found evidence that cannabis use increased the risk for mania and possibly suicide.20

IMPACT OF MARIJUANA ON PROGNOSIS OF MENTAL ILLNESS

Significantly, the negative impact of cannabis use on a worse prognosis in schizophrenia is now documented. The 357 patients identified with schizophrenia from the 50,087 Swedish conscripts were followed from 1973 to 2007. Conscripts who had a history of cannabis use had longer first hospital stays (59 days versus 30 days), had a higher rate of readmission (10 times versus four times), and had a higher total number of hospital days (547 days versus 184 days). They also had a threefold increased risk of having more than 20 hospital readmissions compared with those patients who did not use cannabis. This study controlled for multiple variables, including previous diagnosis of personality disorders, socio-economic background, and use of alcohol and other drugs.22

One mechanism that may explain marijuana users’ increased risk of mental illness is the increase in neural noise caused by cannabis. Neural noise is random neural activity of the brain which reflects poor processing of information. The active constituent of cannabis (delta-9-tetrahydrocannabinol) has been reported to increase this neural noise, and this may play a role in the psychosis-like effects of cannabis.23

There also appear to be genetic predispositions to developing marijuana-associated psychosis. Two studies have evaluated the genetic basis for psychosis risk with marijuana use. In one study people who used marijuana and carried the AKT1 C/C  gene versus the T/T genotype were at a 7-fold increased risk of psychosis with daily cannabis use. The AKT1 C/C gene encodes for an enzyme affecting dopamine signaling in the striatum.24 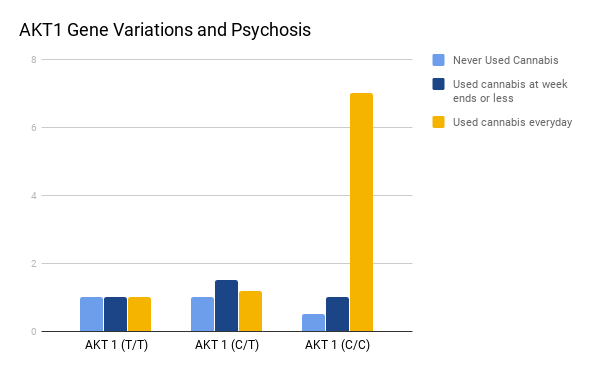 Above chart reproduced from www.drugabuse.gov

Another study found an increased risk if a variant of the gene for COMT was present. This gene affects an enzyme that degrades neurotransmitters – catechol-O-methyltransferase.25 Both of these studies implicate the dopamine reward-pleasure system in the brain.

Children are every culture’s most precious resource as they determine the future. The legalization of marijuana for adults results in an elevated use of marijuana not only among adults, but also among youth. Adolescents are more likely to become addicted and suffer mental harm due to the immaturity of the adolescent brain and its rapid development during this stage of life. A significant body of science now demonstrates that marijuana use is responsible for an increased risk of long standing mental illness, particularly depression, suicidality and schizophrenia. Furthermore, this elevated risk is found even among children and young adults who use small amounts of marijuana. Society has an ethical duty to protect this vulnerable population - and America’s future - by discouraging marijuana use and restricting its availability. Therefore, ACPeds urges policy makers to put the needs of children first by enacting legislation to prohibit the use of marijuana except for medical conditions. This should be done only after rigorous scientific studies have demonstrated proven benefit in accordance with evidence-based guidelines for optimal routes of delivery and dosing for specific medical illnesses.