ABSTRACT: The World Health Organization has stated there are significant health risks and no medical benefits to female genital mutilation (FGM).  The American College of Pediatricians agrees with this assessment and is therefore categorically opposed to this practice and agrees with its designation as a Federal crime. However, as people from cultures that practice FGM immigrate, over 500,000 women and girls in America are felt to be at risk for suffering from the negative sequelae of FGM.  Therefore, the College has published this brief statement to educate pediatricians and other child health professionals about the negative physical and psychological impact of FGM so they can better care for patients at risk.

Female genital mutilation (FGM) is defined by the World Health Organization as “procedures that involve partial or total removal of the external female genitalia, or other injury to the female genital organs for non-medical reasons.”1 In some cultures FGM is associated with femininity and modesty, and is promoted as a means of assuring virginity prior to marriage. There can be strong social pressure to comply with this long-standing cultural tradition.

FGM is more commonly practiced in some countries in Africa, including Nigeria, Mali, Sudan, Somalia, Egypt, and Guinea. 2 It also occurs in communities in the Middle East and Asia.  The World Health Organization estimates that over 200 million girls and women have experienced FGM.  While the majority of procedures are performed during early adolescent years, newborns and young infants have been affected.  Rates of FGM around the world have been decreasing over the past ten years due to education campaigns and implementation of laws making the practice illegal. 1

However, in the United States, an increasing number of girls are at risk as people from cultures practicing FGM immigrate here.  Over 500,000 women and girls in America are felt to be at risk, and this number has nearly doubled in the past ten years. 3 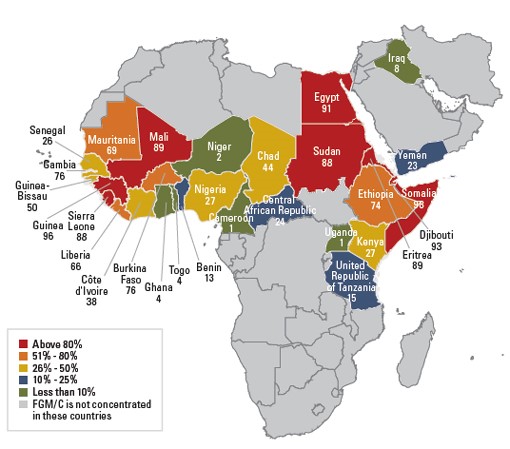 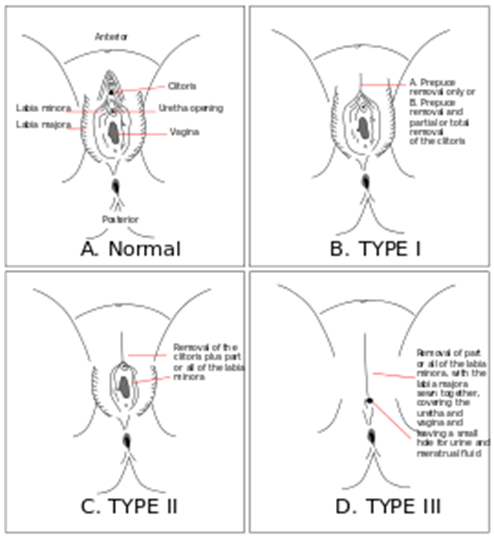 The terminology itself has generated controversy.  The World Health Organization emphasizes the fact that there are no medical benefits associated with even the least invasive procedure.  Therefore, the WHO uses the term ‘mutilation’ to “establish a clear linguistic distinction from male circumcision, and emphasize(s) the gravity and harm of the act. Use of the word ‘mutilation’ reinforces the fact that the practice is a violation of girls’ and women’s rights, and thereby helps to promote national and international advocacy for its abandonment.“ 4 The American Academy of Pediatrics (AAP) briefly chose to use the term ‘cutting’ to avoid offending women who have experienced FGM but who do not view themselves as mutilated.5,6 However, advocates opposed to FGM state the term ‘cutting’ does not adequately convey the severity of the procedure and its potential complications. 2 In a 2010 policy revision, the AAP briefly endorsed this practice, stating, “It might be more effective if federal and state laws enabled pediatricians to reach out to families by offering a ritual [clitoral] nick as a possible compromise to avoid greater harm.” 5 Amid a firestorm of criticism, the AAP retracted this endorsement.6

The complications of FGM are both physical and psychological, and increase with the degree of severity of the procedure, with Type 3 having the highest rate of complications. Immediate complications include severe pain, hemorrhage, infection (including tetanus and sepsis), urinary retention, and rarely shock and death. Long-term complications involve obstruction to both the urinary and gynecological systems.  Dysuria, urinary tract infections, and inability to completely void are some of the urinary tract complications.  Painful and difficult menstruation as well as pain during intercourse occur, but the most serious complications are those related to childbirth. 1,7 A World Health Organization study in six African countries on over 28,000 women demonstrated that women who had undergone FGM were at greater risk for Cesarean section, postpartum hemorrhage, and extended hospitalization. Their infants were at greater risk for stillbirth, infant resuscitation, and early neonatal death.  The authors state, “FGM is estimated to lead to an extra one to two perinatal deaths per 100 deliveries.”  This study also confirmed that those women who had undergone Type 3 FGM and their infants had the highest risk of complications. 8

Psychological complications have been less well studied, but may include posttraumatic stress disorder and depression. 9

A PDF of this statement is available here: Female Genital Mutilation PDF

The American College of Pediatricians is a national association of licensed physicians and healthcare professionals who specialize in the care of infants, children, and adolescents. The mission of the College is to enable all children to reach their optimal physical and emotional health and well-being.