We are a fairly large rural county-wide school district in south Georgia, evenly divided among Caucasian, Black and Hispanic students. About thirty-five years ago, the first sexual education class was introduced to a second-grade class with “Good Touch, Bad Touch.” About 20 years ago, our local Pregnancy Care Center (PCC) focused on promoting sexual abstinence. A Sexual Risk Avoidance (SRA) program, “Choosing the Best,” was taught to all eighth-graders by a woman dedicated to promoting sexual abstinence. Our under 18-year-old pregnancy rate plummeted.  When she retired, the program was taken over by science teachers and coaches, many of whom were not really interested, and the teen pregnancy rate rose.

In early 2019 under the direction of a program from the University of Georgia (UGA), a loose coalition including high school students was formed to deal with teen pregnancy. Under the influence of “experts” from UGA, they were informed that abstinence programs did not work and were given a choice of three comprehensive sex-ed programs and chose “FLASH,” a program out of Seattle, Washington. They did, however, vote to omit lessons on homosexuality and gender identity and condom demonstration. The current Director of our Pregnancy Care Center had been at some of these meetings. When Covid came, the meetings were put on hold for a year.

Near the end of this time, I learned about the Coalition and meetings from the PCC Director. I knew that through information and contacts from the American College of Pediatricians (ACPeds) that I had to get involved and could make a difference.

Since the Coalition was open to anyone from the community, I invited myself to the first post-covid meeting (zoom) and was not allowed to share my views but set up a couple of meetings with the UGA experts. I was told that High School was a done deal, but I was invited to look over a couple of Middle School lessons. I also contacted an ACPeds Fellow in Seattle who sent me copies of the entire FLASH High School curriculum and some evaluations. UGA eventually gave me a copy of the whole Middle School Curriculum. I spent many hours going over it and offering criticism and changes.

Email addresses of coalition members were not shared by the Coalition facilitator, nor were my comments made available to other members of the Coalition. So we started organizing behind the scenes: the PCC Director, the former sex ed teacher, the head nurse for the school system, and a number of faith leaders in the community.

We sent off for three SRA curricula that had received high marks according to the ACPeds position paper on sex ed in schools and a more recent paper by Stan Weed and Irene Erickson and communicated directly with them.  Irene Ericksen sent a presentation on the differences between Comprehensive Sex Education (CSE) and SRA. In a later in-person meeting, the PCC Director pointed out that the high school curriculum had never been up for a vote. From there, we were able to produce evidence of the superiority of the SRA approach, and it was voted to pursue this. We looked at one curriculum the facilitators brought and at the next meeting pointed out where it sent mixed messages, and the Georgia-based curriculum “Choosing the Best” was chosen. A member from that program attended the meeting and also gave a presentation on the benefits of SRA.

Currently, the Curriculum Committee of our school district is meeting with “Choosing the Best” staff to decide which specific lessons to include in which grade.

We did have some things to our advantage that not all communities will have.  Our School Board, curriculum director, and new Superintendent of Schools are all pro-abstinence.  We had a history of positive results from a past abstinence program, which had withered away in years of the lack of leadership in this area. We invited strong, well-respected local leaders to the Coalition and did not face local opposition, at least from those who came to the meetings.  The resistance from the University of Georgia, 250 miles away, dissolved with a united local presence.

There remain challenges. The highest rates of unwed pregnancies, STIs, etc., are in the college-aged and early twenties. While it would be good to have a program for high school seniors, students have so many off-campus opportunities that there is no place in the curriculum that administrators or students brainstorming can find to put into a program.

Sex Education in the Home and the School

The ACPeds strongly endorses SRA education and recommends its adoption by all school systems in lieu of “comprehensive sex education.” This position is based on the public health principle of primary prevention, promoting risk-avoidance in lieu of risk-reduction to obtain the highest standard of health.
Read More

School-based comprehensive sex education (CSE) curricula chiefly emphasize the secondary public health principle of risk reduction. CSE programs in America’s schools have not demonstrated long-term effectiveness at increasing sexual abstinence among adolescents, nor have they been shown to increase long-term condom and contraceptive use among sexually active youth.
Read More 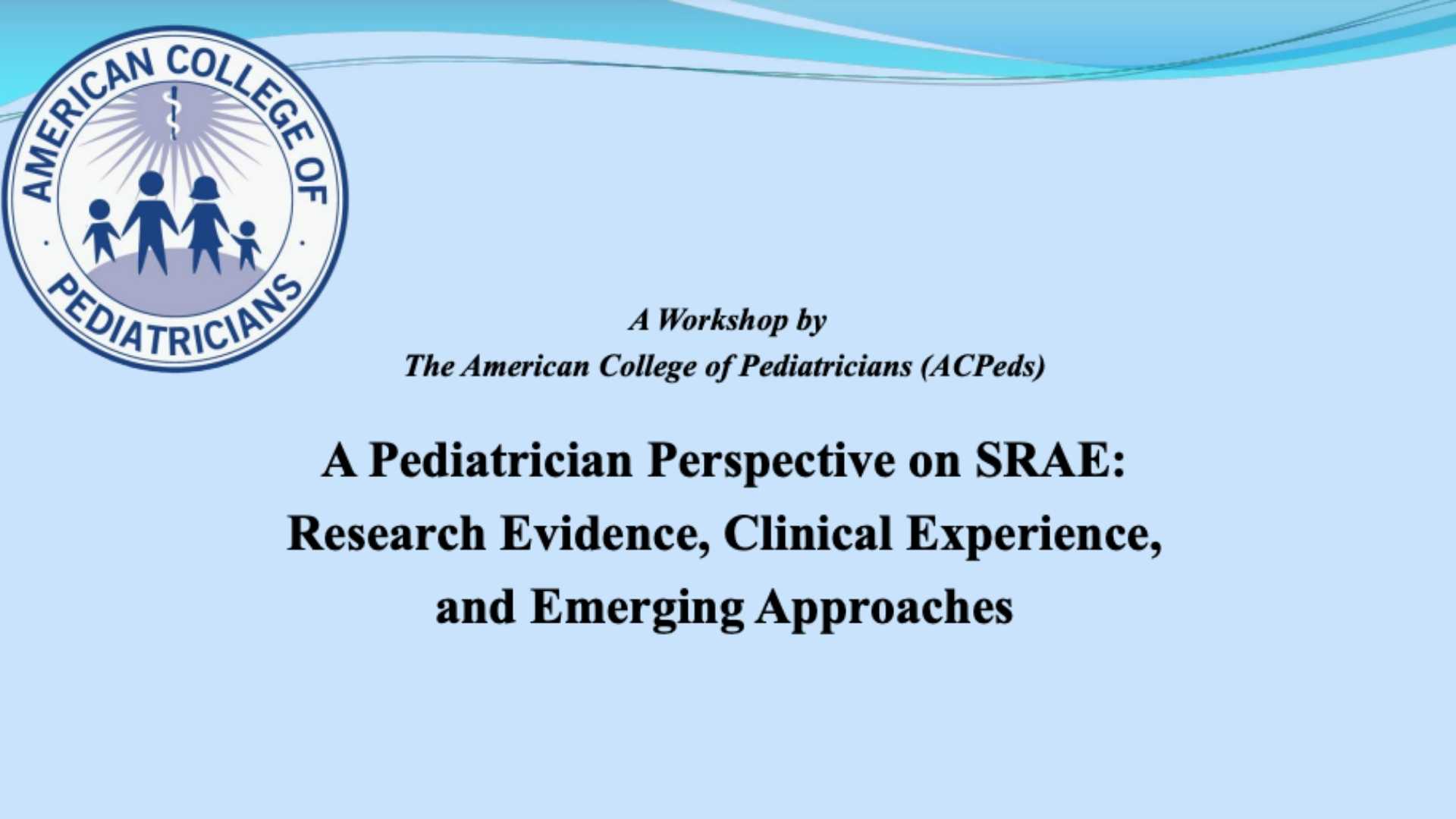 A Pediatrician Perspective on SRAE